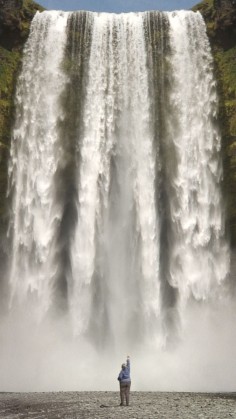 source: stephenhilyard
Waterfall presents the viewer with a single static shot of a majestic waterfall. Over the course of the piece a number of diminutive figures walk slowly into the shot on the gravel bar at the bottom of the falls. They have come to pay their respects to the waterfall, we might call them pilgrims – we might call them tourists. Their slow-motion performances appear to be a mixture of the comedic and the devout.

The subject of Waterfall is the tension between the fascination for the profound which brought them here and their inability to grasp it once they have arrived. This manifests itself in apparently bemused wanderings, in the deployment of cameras and in the unconscious repetition of certain cultural tropes. In particular the pilgrims assume an arms spread posture of crucifixion in order to have their photograph taken in front of the waterfall. These tropes are what interest me most – the fact that they have become clichés marks them out as evidence of the impulse towards the sublime that we all share. The fact that we consider them kitsch or silly speaks to the inevitable failure of any attempt to capture or express the sublime. For me the key quality of the sublime is that it has never been captured or explained, perhaps it has never even truly been experienced, and yet we return again and again to places like this waterfall in the belief that it is there for us. We often fall back on past forms in our attempts, the clichés that result are often labeled “kitsch”. For me they are markers of a doomed yearning for the profound that is both tragic and poignant. The fact that we continue to return in the face of repeated failure is heroic. The central figure who stands in motionless contemplation amongst the comings and goings of the other tourists appears pathetic, and yet she is also a true hero in her stubborn devotion to the waterfall. She can’t help but be an heir to a belief in the wilderness handed down to us all by the romantics. Waterfall deliberately quotes from this history of the romanticized wilderness. The imagery of the waterfall has been manipulated to present an ideal of the concept “waterfall” rather than a specific location. The sound track for the piece is constructed from various sections of romantic classical music performed by ten year old boys during their piano lessons. Their performances are both vibrant and flawed, they evoke the struggle (and maybe the delusions) we all share in our attempts to grasp the profound.
.
.
.
.
.
.
.
source: artwiscedu

Stephen Hilyard is an artist and Professor of Digital Arts at the University of Wisconsin Madison. He was born in Britain, where he trained to be an architect. He subsequently supported himself by working as an architect while developing a career as an artist. After traveling and living in Africa for several years he moved to San Francisco, where he continued to make art, specializing in sculpture. During this time he worked as a professional sculptor in a fine art bronze foundry before moving to Los Angeles to study at the University of Southern California. After receiving his M.F.A. he worked for two years for Peter Carlson & Co., a company that specializes in large scale fine art fabrication, where he helped create work for Jeff Koons and Claes Oldenburg. As a design engineer for the company he started working with digital drafting programs and 3D modeling applications. He began to use computers in his own art practice soon after this. From 1999 to 2004 he taught Sculpture and 3D Digital Media at the University of Minnesota Duluth. In 2004 he accepted his current position at the University of Wisconsin Madison where he specializes in teaching 3D digital modeling and animation. Hilyard creates artwork in a wide range of media both digital and traditional, his work has been exhibited internationally, including galleries in Los Angeles, San Francisco, Chicago, Seattle, Minneapolis, Perth, Sydney and London. Hilyard’s practice has been supported by grants and fellowships from The Huntington Library, The Harpo Foundation, The American Scandinavian Foundation, The McKnight Foundation, The Wisconsin Arts Board and the Minnesota State Arts Board.
.
.
.
.
.
.
.
.
source: stephenhilyard

All of my work relates in some way to a quality of experience that has been described as “The Sublime”, often described as an ecstatic experience that places the viewer within some kind of larger context, whether it may be the wilderness, the cosmos or the sacred. This is an idea with a lot of history to it. My work deals with this history, as well as my own feelings about what the Sublime might mean. There is no doubt that the cultural history which we all share is an important factor when looking at such a concept, the Sublime has been described by a number of commentators as the quintessential preoccupation of modernism. However I feel that there is also something universal about the attraction of the Sublime, a lot of my recent work is inspired by the fact that the human mind has always longed for this quality of experience, has always struggled to encapsulate it in its creations, and yet so often this fails, so often we fail to experience the Sublime, and we fail in our attempts to express it to ourselves or to others. In spite of this we continue to struggle for an experience of the Sublime and for some form of expression capable of capturing it, some way to keep it and hold it close forever. A large part of what we call “kitsch” is a result of such failed attempts to encapsulate the profound. For me there’s something tragic in this yearning for such an un-presentable concept, maybe even pathetic, but there’s also something heroic in the persistence of the Sublime impulse. Whereas my work once attempted to capture the essence of the Sublime, now it uses the visual rhetoric of the Sublime to explore those aspects of self that conspire to frustrate our experience of it.

I believe that the key to understanding the inevitable frustration of our impulse towards the Sublime and other similar ideals is the essentially subjective nature of all experience, even the most apparently profound and absolute. My work often evokes the various forms of wilderness traditionally associated with the Sublime since its rise to prominence in the nineteenth century. I myself first came across the concept as a way to understand my own experiences in the mountains. At the time I believed there was something beyond myself to be found there. Now I realize that the beauty we see in wild places, the spiritual resonance we feel, comes from us. The ideals we see incarnate in an apparently untouched landscape or a wild creature are projections, but that doesn’t make them any less important, only all the more human. Furthermore these ideas and ideals did not pop up out of nowhere, we learned them. Because our understanding of the profound is generated by this collective of prosaic minds we call “culture” it is mutable. 200 years ago the wild landscapes we now cherish above all others were considered ugly and diabolical, a blemish on the earth that should be removed. Now our culture has moved on and we go to these places in search of enlightenment.

This underlying subtext of an internalized world model leads me to create work that aspires to the condition of a perfect simulation, without fully achieving it – subtle clues as the synthetic nature of the final product must remain. In this I have found the computer to be a particularly appropriate tool for art making. My interest in digital media remains focused on its ever growing capabilities to simulate the world around us, not as it is – but as we wish it to be. The subsequent undermining of traditional concepts of the reality and reliability are at the center of my work.

For me making art is about being human, particularly the things we all share. This has led me to look closely at the history of the culture that made me what I am. My work is often based on sources taken from this history. This raises the question of information; how do these stories relate, if at all, to the piece? I have no interest in telling these stories per se (I am interested in the more elusive subject that lies behind them), so I have always looked for ways to escape language. I am interested in the idea of lying, in the subversion of various types of information that we are accustomed to trust. Whether it is a photographic image, a sequence of events or an explanatory text, the information in my work is often unreliable.

Ultimately, my work is designed to remind the viewer that she is in the presence of artifice – that this work is attempting to present something of a profound nature, but that it is failing because of its connections to the concrete. In this the viewer might recognize her own condition.
.
.
.
.
.
.
.
source: mmocaorg

Stephen Hilyard was born in Britain where he studied architecture. He spent several years living and traveling in Africa until moving to California where he received his MFA from the University of Southern California in 1997. He has since worked for Peter Carlson & Co. and taught at the University of Minnesota Duluth. Hilyard creates artwork in a wide variety of media and his work has been exhibited across the United States and abroad. He is represented by Platform Gallery in Seattle where he has held two solo exhibits. He is currently a Professor of Digital Arts at the University of Wisconsin-Madison.