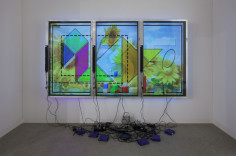 source: artuner
Tabor Robak (b. 1986) was born in Portland, Oregon and now lives and works in New York. He received his BFA at Pacific Northwest College of Art in 2010.

Tabor Robak started his career as a graphic designer, working with multinational brands such as Nike and T-Mobile. This gave him an understanding of marketing, and the use of digital technology to create images designed to sell; the visual language used by multi-nationals. The artist’s virtuosity with programs such as Photoshop, CINEMA 4D and Unity allows him to generate vivid and unique scenes often displayed across multiple high definition panels.

There is a dramatic tension in his work between the real and the imagined in his use of often-appropriated digital objects to create virtual landscapes, which frequently contain elements – animals, machines, fragments of videogames – that are recognisable from our day to day life. This creates a symbiotic relationship between the digital and the real. In a very real way digital space has now become an intangible reality. The worlds built by Robak have a distinctly cinematic sensibility that hyperbolises the shine and dramatic effects of 3D rendered animation. The aesthetic of his work is supremely important, drawing the viewer into a truly alluring, indulgent and strangely gratifying environment. There is a further challenge to the void between high-art and the worlds of 3D animation and gaming, in the intersection between depiction and simulation. This can be partially attributed to the vernacular of advertising Robak is so proficient at utilising.

Robak’s work references the amount of time individuals remain connected to the digital world, whether it is through digital mapping applications or as a virtual avatar. It seems strange that such mesmerising landscapes do not truly exist in any physical element, representing the pinnacle of non-auratic art. They are actions rather than objects and unlike painting, sculptures, or even celluloid, they lack any form of physical support. Furthermore, by using an imagery that already exist as commercially available templates – such as Candy Crush Saga-ish sceneries or gigantic smartphone screens – he revolutionises the ready-made. For instance, in ‘Drinking Bird Seasons’ (2014), Robak appropriates the appearance a locked iPhone screen, combined with carefully programmed virtual fluids moving across it. He has described his work as having a “photoshop tutorial aesthetic” and in as much, the manipulation of images and digital objects to create fantasy is clearly present in his oeuvre. A significant example is ‘Dog Park’ (2015), which stems from an encoded algorithm generating a fantastic labyrinth of endless possibilities and configurations, where digitally drawn birds interact with complex mechanisms.
.
.
.
.
.
.
.
source: artsynet
New media artist Tabor Robak probes the nature of reality in animated visualizations of virtual environments, as well as browser-based artworks that isolate elements and tropes from video games, action films, and science fiction. Robak captures the tension between the real and the artificial in his 3-D composites of digitally rendered stones, such as Rocks (2011), which explores the symbiotic relationship between humanity, nature, and technology. Robak also produces immersive digital environments, such as Memory (2010), in which a viewer’s browser becomes an expansive visualization of moving cloud-like forms.

American, b. 1986, Portland, Oregon, based in Brooklyn, New York