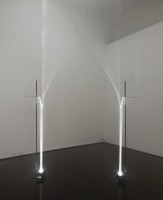 Troika (Eva Rucki, b. 1976, Conny Freyer, b. 1976, both German, Sebastien Noel, b. 1977, French) are known for developing new vocabularies at the intersection of sculpture, architecture and contemporary installation. They met while studying at the Royal College of Art, London, and subsequently started working together in 2003, emerging as a practice that creates work collectively through observation, dialogue, research, ‘trial and error’, in turn, revealing the limits of rational thought as a wondrous and unique asset of the human mind to decipher our reality.

Troika has been featured in numerous group shows at institutions such as: the MoMA New York (2008), the Victoria & Albert Museum London (2009), The Art Institute of Chicago (2009), Tate Britain (2007), and their work is represented in the permanent collections of the Israel Museum Jerusalem, British Council, The Art Institute of Chicago, Victoria and Albert Museum and the Museum Of Modern Art New York.
.
.
.
.
.
source: designboom

troika’s new solo show at the OMR gallery in mexico city presents several pieces that explore the fundamental tension between perception and reality; fact and purpose; subject and object; culture and nature. he exhibition underlines the paradoxes of human existence and questions a dualistic vision of the world in favour of a possible synthesis. the far side of reason brings together both existing and five new works that deliver the investigative nature of this query and troika’s practise, through drawing,
painting, installation and sculpture. starting from the premise that scientific method gave rise to a mechanistic society where logic and reason stands in strict opposition to the subjective part of man, the work offers us an insight into these apparent paradoxes, and troika the impetus to disentangle the purpose of science, in favour of exploring the intimate arena of the unexplainable. ‘squaring the circle’ (2013), a new work argues that if every method of inquiry reveals a particular facet of the truth or the nature of reality; their seemingly antithetical forms should find reconciliation in the knowledge, that ‘one-ness’ has a plurality of embodiments. ‘hierophany’ (2013) acknowledges and contemplates the emerging complexity resulting from simple interactions. ‘suspension of disbelief’ (2013) suggests a synthesis between agnostic reason and intuitive belief; while ‘light drawings’ (2012) examines the wilful submission to the unknown applying control over what is inherently uncontrollable.

‘suspension of disbelief’ a pillar of light is met by a fresnel lens refracting the rays of light that travel through its focal point. on exiting the lens the rays do not simply change direction but continue into a half arch, and contrary to what one would expect, form a structure reminiscent of a half arch. the installation creates a spatial suspension of disbelief which questions our relationship with the metaphysical in a world increasingly governed by practical, rational and scientific principles.

by confronting the viewer with the impossible phenomenon of bending light it creates a space for contemplation and introspection, suggesting a synthesis between agnostic reason and intuitive belief. the arch of light lies between the intangible and physical, the visible and the seemingly impossible. it asks the viewer to pause and contemplate the surrounding space whilst promoting openness rather than closure. the illusion doesn’t usurp but rather re-enforces the experience of a space. here, in the spirit of stain-glass, of ‘lux nova’, in which spirituality is invoked through light, science invokes the sublime.