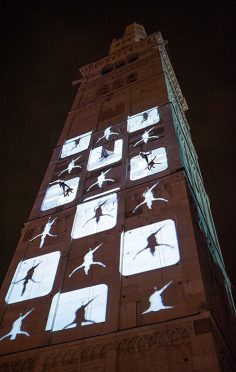 Imagine a world where gravity is flipped on its side and people travel not by streets and sidewalks, but up and through the sky. This is the world created by Urban Tale, a city specific show created by the “vertical performers” company Cafelulé.

Urban Tale is a performing and visual arts show that combines elements of dance, light art, video projection, live music, and cinema into an otherworldly experience that uses vertical space as its stage.

Cafelulé, a 15 person group of artists, musicians, and dancers from across disciplines, introduced Urban Tale to the public in May in a breathtaking performance that used the 86 meter tall bell tower of the Cathedral of Modena in Italy–the Torre della Ghirlandina–as its stage. The performers glided and jumped along the wall of the historic building as live music and stories-tall video projections supplied a dynamic backdrop, changing the context of the performance second by second. In this inaugural performance, the dancers moved up, down and across the towering vertical plane with ease, at one moment scrambling up the walls of the bell tower like a charging battalion, then the next, falling and floating like gravity-defying skydivers. Behind their movements, the walls of the buildings served as a screen for hypnotic projections depicting everything from bustling cityscapes to constellation maps. The effect was jaw-droppingly surreal. Urban Tale is an exploration of the intersection of human, machine, and public space, a perspective shifting performance that challenges the audience to reconsider how they view and experience the immediate world around them. Through the performance, Cafelulé explains, “technology becomes an actor,” an integral part in the telling of the tale of the transformation of an “intelligent, interactive and invisible city.” Public space takes on a bold, new purpose and life through the performance; and in so doing, new layers of meaning are added to these everyday places and buildings.

Technology and performance are inextricably intertwined in Urban Tale – each dependent on and complementary to the other. According to Cafelulé, the hope is to bring technology out from behind the curtain – to “bring [it] to the stage and not leave it behind the scenes but give it a body and life, making it an actor capable of interpreting a feeling, of expressing and provoking an emotion.”

Technology is not only critical to the production of the show; it is integral to how the performance is documented and experienced by virtual audiences as well. As Marco Boarino, Cafelulé’s Artistic Director, explains: “Every city [that Urban Tale performs in is] shot from above by flying drones equipped with HD cameras, in order to discover them from an unusual perspective, preserving its memory from the sky. The shooting is an integral part of the show – it interacts with the performers, making every repeat performance unique and personal.”