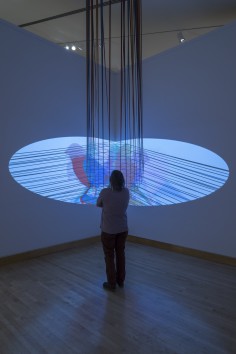 source: vesapekkarannikkonet
The canary has been a pet in Europe since the 16th century. It was initially appreciated for its singing voice and exoticism in European homes. Its value later began to defined by the colours of its plumage
In the early 20th century two German amateur bird breeders, Hans Duncker and Karl Reich began to genetically manipulate canaries to produce a completely red canary. Their crossbreeding experiments were the first attempt to create a genetically constructed animal. This way of thinking also found resonance among the National Socialist movement that was in power in Germany at the time, and the canary experiment has been partly regarded as activity in keeping with the eugenics and racial theories of the period. The genetic experiments in colouring birds coincided with the period when the modernist conception of the image began to take shape. This orientation, which was also regarded as degenerate art in the interwar years, cleansed palettes and created new theories of colour, such as the ideology of pure colour of Piet Mondrian’s Neo-Plasticism.
Source: Tim Birkhead: Red Canary, the Story of First Genetically Manipulated Animal
In Canary a video image of superimposed different-coloured canaries is projected onto a corner of the exhibition space. Overlaying the image is a tensed encircling bunch of climbing ropes casting shadows on it. Are you into climbing?
No, but I became interested in it because it is about seeking an extreme experience, aiming for the summit. The present-day climbing enthusiast is like a properly equipped version of Romanticism’s wanderer above the clouds.
Climbers don’t lend their ropes. They have to trust them, know their history of use, wear, elasticity and durability. The different colours of ropes represent specific uses. When hanging on the mountainside it is a relief to know what or who is at the end of which rope. Canary is based on the story of the breeding of birds, which is a direct metaphor of the painterly mixing of colours. The obsession with creating the red bird in the early 20th century is like the aim towards a perfect monochromatic painting. The notions of racial improvement have connections with contemporary discussion on the ethics of genetics.
I also considered the connection between the purity of modern form and the idealistic point of view. When a painting or work of sculpture is reduced to its surface it is idealized to be only what we see in it. The visual motif of a work serves only as a composition.
.
.
.
.
.
.
.
source: mutualart
Vesa-Pekka Rannikko is a Finnish visual artist who was born in 1968. Vesa-Pekka Rannikko has had several gallery and museum exhibitions, including at the Kiasma, Museum of Contemporary Art and at the Kemper Museum of Contemporary Art. There have been many articles about Vesa-Pekka Rannikko, including ‘The 54th Venice Biennale’ written by Emily Warner for The Brooklyn Rail in 2011.