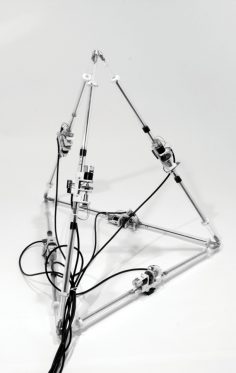 Someday, not too long from now, you could be walking through a park and pass by a metal structure that looks like a lot like a modernist jungle gym. But it’s not a playground, at least, not really. Rather, this geometric form is a moving piece of architecture that responds to both you and its surroundings like a stray animal might. This strange reality, a time when the structures around us act less like traditional buildings and more like living, thinking organisms, isn’t too far away. In fact, if all goes according to William Bondin’s plan, this could be the case as soon as 2015.

The Malta-based architect’s current project, developed at The Bartlett‘s Interactive Architecture Lab under Ruairi Glynnis, is a look into how we can create playful, responsive architecture that does more than just sit in a fixed position. Called Morphs (Mobile Reconfigurable Polyhedra), these crawling, geometric structures are inspired by the slime mold Physarum polycephalum, an organism whose cognitive processes is based on its surrounding environment as opposed to being contained in a centralized brain like humans. “Over the course of its evolution, it has developed a clever way of exploiting its surroundings in order to perform navigational tasks and memory-related processes,” Bondin explains of the organism. “For instance, when foraging for food, it deposits slime in areas which have already been explored, and then avoids the same slime so that it will not re-explore the same area twice.”

Bondin took those principles and applied them to his mobile architectural form, which crawls along very very slowly, flipping one tetrahedral nucleus over the next to change positions. Much like the slime mold, Morphs take notes of their surroundings and deposit digital data into their environment, which helps to inform their path and actions. This way, the robots can tell where they’ve been and where they should go next. Morphs are not necessarily smart, but they are extremely adept at navigating the landscape that they find themselves in. “Morphs are very low-level creatures in terms of computational abilities,” he says. “And their complex trajectories are a result of the complex environments in which they are placed.”

So what do these reactive architectural structures actually react to? Bondin says they’re constantly assessing light intensity and water presence, which helps them make the best decision about their path. “This ensures that they will not get trapped in ponds or under trees, and helps them to locate themselves in sunny and dry areas,” he says. Like living organisms, Morphs have preferences, which are mostly based on the environment they find themselves in and their technological makeup. For instance, because their components are solar-powered, Morphs tend to avoid shady areas. Likewise, Bondin says Morphs are attracted to areas with high pedestrian traffic: “This ensures a higher probability of engagement with the public, and they stay clear of vehicular roads due to their very slow movements,” he says. “They are also terrified of water and do not operate in wet conditions, in order to protect their electronics.” These basic, low-level personality traits are similar to humans’ primary instincts, Bondin explains. Morphs, like humans, are mostly just trying to survive.

The idea is that by the end of 2015, these interactive structures will be a part of certain public landscapes like parks. Bondin’s current prototype is an aggregation of tetrahedral trusses and telescopic edges that can extend to twice their normal length, which helps the structures to shift their center of gravity and actually move. “When at rest, the tetrahedron nucleus can make a step in either of three directions, depending on which axis is closest to its target location,” he says. Right now, Bondin is testing a small-scale Morph, but next year, he’ll be working to build bigger assemblages, so they resemble what you see in the renderings above. At full-scale, it’s hard not to draw comparisons to Ron Herron’s “Walking City” or Theo Jansens’ bizarro walking Strandbeest.

Though, for what it’s worth, Bondin’s ambitions for Morphs are actually pretty modest. At the project’s core, Morphs is tied into the parametric design trend, whose rise has allowed architects to build structures that respond to environmental input like temperature and daylight. But Bondin says he was actually less interested in pushing the functionality of the robotics. “The level of responsiveness of Morphs is essentially the bare minimum required to make them appear as autonomous and motive creatures,” he explains. But rather, he wanted to take Morphs a step past public art and bring them into a territory where they would become a responsive part of the landscape. “I’m more interested in the theatricality of architectural performance,” he says. “These giant crawlers are meant to function as dance partners, responsive sculptural media and spontaneous radio stations.”
.
.
.
.
.
.
.
source: interactivearchitectureorg

“The paper highlights the gap, which exists between digital simulation and physical prototyping in the performance of dynamic architectural systems. Feedback loops are explored as a solution to mediating between these two domains as well as providing a means to steer material and morphologically embodied behaviour towards desired goals. Building upon this understanding, a prototype for adaptive and kinetic structures is presented called ‘Morphs’ along with a speculative proposal for their deployment as a mobile reconfigurable architecture. The paper presents the initial stage of a three-year research project towards a fully realised adaptive autonomous mobile architecture for public space.”

Morphs 1.0 has now recieved funding for a second iteration thanks to support from the Institute of Making at UCL so watch out for a Mega Morph coming to a park near you!