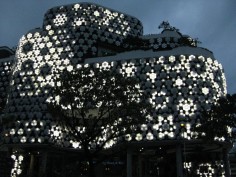 The architecture of WOHA, founded by Wong Mun Summ and Richard Hassell in 1994, is notable for its constant evolution and innovation. A profound awareness of local context and tradition is intertwined with an ongoing exploration of contemporary architectural form-making and ideas, thus creating a unique fusion of practicality and invention. WOHA conceptualizes all aspects of the architectural process, and environmental principles have always been fundamental to the work of the practice, which is guided by a commitment to responsive place-making and to the creation of an invigorating and sustainable architecture.
.
.
.
.
.
.
.
source: architravel

WOHA is a multidisciplinary design firm led by directors Wong Mun Summ and Richard Hassell. Creative and technical staff are grouped in teams, that follow projects all the way through from concept to completion.

Wong Mun Summ was born in 1962, and graduated with Honours from the National University of Singapore in 1989. He is a member of the Singapore Institute of Architects, and served on the board of Singapore’s Urban Redevelopment Authority (URA) from 1999 to 2005. He has also served on the International Design Consultancy for the Waterfront at the Downtown at Marina Bay, and as a member of URA design advisory panels for such projects as the Singapore Sports Hub, the Marina Barrage, and the Integrated Resort at Marina Bay.Richard Hassell was born in 1966, and graduated from the University of Western Australia in 1989. He was awarded a Master of Architecture degree from the RMIT University, Melbourne, in 2002. He is currently a board member of both the DesignSingapore Council and the Building and Construction Authority of Singapore, and has also served on committees for the URA, SIA and Board of Architects (BOA) in Singapore. He has lectured at universities in Singapore, Australia, Hong Kong, the USA, and the United Kingdom, and was an adjunct professor at the University of Technology, Sydney, from 2006 to 2009.