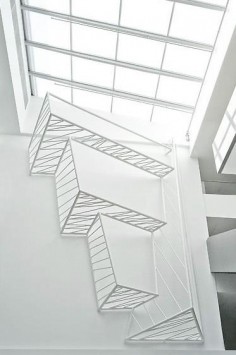 Located in the Instructional Centre, University of Toronto Scarborough

To the viewer familiar with the architecture at UTSC’s campus, the particular composition of Young & Giroux’s Interregnum should appear recognizable. The stacking and cantilevering of quadrilateral (Isosceles Trapezoidal) forms is a recurring motif within architect John Andrews’ Brutalist Science and Humanities wings. The composition is based on an interior fragment of Andrews’ Neo-Futurist mega-structure, and appears to protrude within the interior of this newest architectural addition to the campus. These displaced volumes are presented like a contour drawing that has been loosely shaded by hand. Depending on the weather and time of day, the powder coated armature will appear to either expand or compress in volume, at times interacting with the geometric abstraction in the building, and sometimes presenting itself as an autonomous formal quotation of the nearby Andrews buildings.

The artists have created the work through careful consideration specific to this site—the atrium of UTSC’s Instructional Centre, designed by Diamond and Schmitt Architects Incorporated. Interregnum is an abstract composition that responds to the many unique aspects and constraints of this atrium — soaring verticality; proximity to viewers on three upper levels; and exposure to large amounts of sunlight that rake the wall with shadows. Young & Giroux have produced a work that recognizes and harnesses these conditions while attempting to direct the viewer toward considerations that extend beyond their immediate surroundings and outward to the larger campus, its history and the formal changes within the institutional architectural aesthetic.

Interregnum’s composition operates on an architectural scale, enhancing the space of the atrium. In its geometric outline, this structure generates strikingly different compositions depending on the angle of the view and the location and intensity of sunlight entering through the skylight.

ABOUT THE COMMISSION PROCESS

Young and Giroux’s winning artwork proposal was singled out by a Selection Committee who agreed that it presented a vision of the new Instructional Centre that is in keeping with UTSC’s growth and movement into the new millennium. Jurors Bill Bowen (Chair of Humanities, UTSC), Annie Onyi Cheung (Artist and UTSC Alumna), Marla Hlady (Artist and UTSC Visual & Performing Arts Faculty Member), Ann MacDonald (Doris McCarthy Gallery Director/Curator) and John Bentley Mays (Writer on Contemporary Architecture and Art) were most impressed by Young and Giroux’s consideration of the UTSC campus as a whole, their rigorous engagement with current themes in contemporary art and architecture, and their compelling sculptural solution to the unique properties of the space. Young and Giroux were selected from an initial 92 submissions—the outcome of an international Call for Expressions of Interest. In adherence with the University of Toronto’s Procurement procedures, the Selection Committee assigned three artist teams to a shortlist, from which emerged this winning team.

Daniel Young and Christian Giroux have been making art together since 2002. They produce sculpture, public art and film installations. Their work is the product of an ongoing conversation concerning the modernity of the mid-century, the production of space and the built environment. Young and Giroux rework modernist forms of abstraction using consumer goods and industrial prototyping methods, construction systems and components to produce sculptural objects that partake in contemporary architectural discourse. Their film works constitute a form of research on sculptural form in the built environment from the architectural to the domestic scale.

Daniel Young and Christian Giroux, the artistic duo who designed the new sculpture in UTSC’s Instructional Centre atrium, have won the $50,000 top prize in the Sobey Art Award. The prize is given annually to a Canadian artist under the age of 40.

UTSC had selected Young & Giroux from among 92 applicants to make a piece of public sculpture for the IC atrium. The artists created Interregnum: Corner Displacement for John Andrews, a sculpture which is constructed of powder-coated aluminum and rises three storeys against a white wall.

“It’s incredibly high praise, and it reaffirms the significance of their artistic production,” says Ann MacDonald, curator of UTSC’s Doris McCarthy Gallery. “We knew this was an exciting and valuable work. This just provides further evidence.”

“Young & Giroux reflect a curious world where digital interfaces have become an inextricable part of our lives,” according to a statement from the awards panel. “Their collaborative practice seamlessly integrates works as diverse as architectural proposals for public spaces, typological films of infrastructure developments across Canada and re-tooled, pre-fabricated consumer goods. Their adaption of computer systems, logic and software embodies a language with which they investigate our more analogue tendencies, our affection for material, formal elements, space and our relationship with the lingering legacy of Modernism.”
.
.
.
.
.
.
.
source: cgdy
Daniel Young and Christian Giroux have been making art together since 2002. They produce sculpture, public art and film installations. Their work is the product of an ongoing conversation concerning the modernity of the mid-century, the production of space and the built environment. Young and Giroux rework modernist forms of abstraction using consumer goods and industrial prototyping methods, construction systems and componentry to produce sculptural objects that partake in architectural discourse. Their film works constitute a form of research on sculptural form in the built environment from the architectural to the domestic scale.