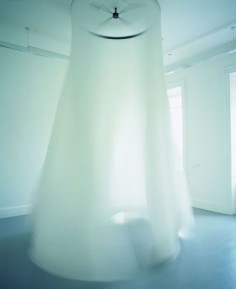 Ann Hamilton’s Filament 11 (1996). This piece consisted of a high curtained structure which circulated the material around in one space. It stopped every 15 seconds or so, enough time for one or two people to enter into the spinning vortex of linen material. Whilst standing inside the whirlwind of fabric I felt as though I myself were almost flying or being transported to another dimension or something (ok, this description might be slightly exaggerated, but I have quite an ambitious imagination!) Either way, I fully enjoyed the experience of the piece immensely.
.
.
.
.
.
.
.
source: annhamiltonstudio
Ann Hamilton is a visual artist internationally recognized for the sensory surrounds of her large-scale multi-media installations. Using time as process and material, her methods of making serve as an invocation of place, of collective voice, of communities past and of labor present. Noted for a dense accumulation of materials, her ephemeral environments create immersive experiences that poetically respond to the architectural presence and social history of their sites. Whether inhabiting a building four stories high or confined to the surface of a thimble, the genesis of Hamilton’s art extends outwards from the primary projections of the hand and mouth. Her attention to the uttering of a sound or the shaping of a word with the hand places language and text at the tactile and metaphoric center of her installations. To enter their liminality is to be drawn equally into the sensory and linguistic capacities of comprehension that construct our faculties of memory, reason and imagination.

In a time when successive generations of technology amplify human presence at distances for greater than the reach of the hand, what becomes the place and form of making at the scale and pace of the individual body? How does making participate in the recuperation and recognition of embodied knowledge? What are the places and forms for live, tactile, visceral, face-to-face experiences in a media saturated world? These concerns have animated the site responsive installations that have formed the bulk of Hamilton’s practice over the last 20 years. But where the relations of cloth, sound, touch, motion and human gesture once gave way to dense materiality, Hamilton’s work now focuses on the less material acts of reading, speaking and listening. The influence of collaborative processes in ever more complex architectures has shifted her forms of making, wherein the movement of the viewer in time and in space now becomes a central figure of the work.