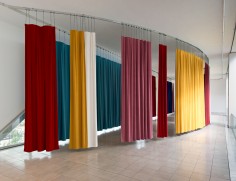 Installed on the ceiling perhaps twenty feet above me there is a single, continuous rail on which hang nineteen double-sided fabric panels. These panels are in several colors: reds, blues, yellows, etc., and the values range from deep and rich to bright; the panels range in width from approximately 4′ to 8′. I recall that some panels change color from front to back, or inside to outside. The installation of Yunhee Min’s For Instance suggests a flattened half oval against the north window wall of the UCLA Hammer Museum’s upstairs, open-air patio.
This interior loggia serves as a passage between wings of the building and often hosts large-scale artworks, and also, as on the day I visited, musical and performance groups. Min’s installation brings color to this impersonal space, and intimacy and play. Within its curtained arc there is a sense of remove, as in a cloister, as well as the potential for revelation, for drama – even lacking a physical audience the space between two panels can become a proscenium for an imagined play.

As I moved among the panels, which are regular in shape and size, and are taller than my body, and so feel architectural and columnar, I had a sensation that is familiar from past experiences with Min’s art. My memory became engaged in a way that is both active and contemplative. I wanted to consider what I had just experienced, as I moved from one spot to another, with what I saw in the moment; and I wanted to look ahead, holding both thoughts in my mind to sort of preempt memory by anticipating what I might feel when I moved again.
At an artist talk in 2002, for the exhibition/installation Events in Dense Fog (at the Cal State LA Luckman Gallery), Min spoke of her large-scale wall painting/installation as “encouraging a viewer to hold in one’s mind the colors painted on one wall while looking at a second wall” from which the first was out of site. (For this Luckman show, two walls were built leaning at acute angels against opposite sides of the gallery, these were painted in bands of color and were separated by a plain white wall.) One year later, for Out of Bounds (from near and afar), 2003, at the Yerba Buena Center for the Arts, Min again engaged the viewer’s memory in several ways: both directly, using painted walls that this time leaned against each other, and so offered a built but unpainted area beneath for contemplation of one’s memory of the color outside; and indirectly, by continuing the painted surfaces into out into the city, where a municipal bus with commuter and neighborhood stops was painted with stripes of color similar to the large installation in the gallery.
Located conceptually and physically between the indoor structure and the mobile city bus, the artist provided two additional incidences of color: one, comprising colored louvers on the gallery’s large windows, occupied a transitional zone and offered views to the structure inside the gallery; and a second, painted institutional-scale stairs which function as a sort of balcony for viewing the museum grounds as well as providing passage into and out of the plaza.

That 2003 bus line piece feels pertinent to For Instance in another, and surprising way: In my mind, the route map of the bus in San Francisco looks quite a bit like the track that holds the curtains, the ceiling track on which the colored fabric panels move. Both the bus and the curtains navigate defined routes in different landscapes, pathways around which people move freely. As objects themselves, the two lines carry colors with which people interact; in a curious way these colors serve as backdrops and as action in the double theaters of the city and of the museum, in which they move, and moved.

At LACMA, in the exhibition Lost Line, curator Rita Gonzalez has installed Min’s Continuum: Structure #3 (2009 and 2012) so that in one gallery it presents itself as a slender supporting member of aluminum framing, the end point of which is recessed into a wall at about 7′ above the floor and about 5′ from a doorway. From the vantage point of this first gallery the white painted metal frame then disappears into a second gallery, where it spans and bisects that space to end, several feet higher, similarly inserted into a wall near an opening into yet another gallery space. Along the way, this member either supports panels of storefront, or is supported by them, and so the sculpture resembles a futuristic urban stage set, with sections of partition, of transparency and of aperture.
The drama that is implied across town in Min’s For Instance loggia/pavilion at the Hammer Museum is fully engaged in this new installation at LACMA. People look fabulous around Continuum, any organic shape does, in fact. The sculptural installation is angular, the colored storefront panels, and also the colored lights, are sharply defined by crisp white structural members and also equally crisp white storefront panels.
Min’s use of white in this piece reminds me of a book that she introduced me to when we met, David Batchelor’s Chromophobia, which is a cultural history of the use of color and of non-color. Knowing that the artist knows this book, and knowing that through the years her use of color has defined her practice, and knowing as well that through the years Min’s practice has helped to define the use of color in painting, means that I have to pay attention to this use of white.

The panels in Continuum include two greys, a transparent red, open spaces and the aforementioned white – actually two whites. (As I transcribe from my notes, this reference to “two whites” makes me question my presumption of colorlessness in Min’s whites.) The artist’s use of white in this piece becomes as tricky as her use of color. Overall these are architectural and institutional whites, but when looked at together the warm and the cold white alter one’s perception without offering any information.
Can it be that the difference is created by light from the painted light tubes? Can I think of these whites in the manner of Batchelor, as arid and lifeless? Can I think of this piece in relation to the cool, white interiors of fancy places? Does Min’s use of white(s) relate to the surrounding architecture the way past works were architecture? (As affect, the white provides a stage for the many-hued light emanating from the sculpture.) Watching people move past the piece, their bodies, whole and in part, are revealed in an open space, and then cropped in a transparent red space, then completely hidden behind white panels, white panels that themselves bleed into the surrounding gallery walls.

Another fact which must be paid attention is that the configuration of this piece has changed since its inception at LAXART in 2009: the fluorescent tubes are now painted, and not in a mechanical way – the paint looks brushed on and is roughly measured out, as with the spacing of the structural members, in some calculus I don’t know. Thinking now, this may be the first time that I have seen any brushstrokes in Min’s work – most often in paintings her colors are rolled on and smooth and sort of resist the eye – or, rather – because they avoid any signifier of making, of the hand, the rolled paintings (and also the manufactured parts of Continuum) immerse one in a theater of color and scale, and they make one (or make me, anyway) aware of my own presence, and of my own actions with the work.
Visible brushstrokes in paintings exist as physical evidence of the artist, and my response to such work is different, and includes thoughts on the artist, faced as I am with their signature in each push or pull or daub and drag of paint. Therefore, noticing the loose brushstrokes of color on the fluorescent tubes I am captivated and I think of the artist looking and considering and measuring with her hand and mixing colors and choosing and behaving intuitively.

With the installation of these two pieces, For Instance and Continuum: Structure #3, museum visitors in Los Angeles have an opportunity to experience large-scale sculptural interventions in public space by an artist whose work has consistently investigated the processional nature of architecture and the relation of architecture and art with time and memory. Both these works also speak of procession as pageant: while as in past works one is aware of one’s body and of one’s movement through space, in these two more recent pieces one’s movement around them inspires a sense of theater and of display.
.
.
.
.
.
.
.
source: aptglobalorg