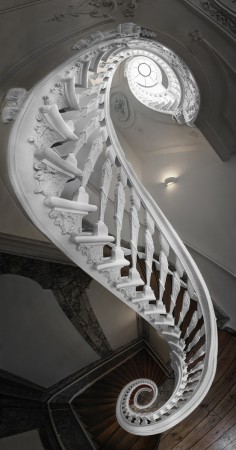 I have a diploma in surveying, and studied aesthetics and philosophy at the University. Franco Vaccari is my intellectual mentor and his technological unconsciousness theory my credo. I research what unconsciously I am unable to see about reality, just like about me. I speak with my camera because it expresses a more complex language. Every photograph reveals something I did not know. Each picture is a revelation, and discloses a new perspective. I am intrigued by these epiphanies and I search for these while playing with photographic deformations. I dialogue with new realities, new subjects, and constantly change my position as interlocutor. The dialectics is refreshed any time someone looks at my creations. The epiphany happens again and I see something in the picture I was not aware of. My work is hermeneutic, ambiguous, open. I don’t believe in the photographic immediacy. There is nothing stable in reality and my camera intends to capture this condition. My anamorphic distortions reflect my existential need for revelations. They offer me a way to look at the realm differently. Photography reveals new perspectives, new places, opening unexpected circumstances and revealing unknown personalities. Perspectives open dialogues. Dialogues pose questions. And I explore their intriguing complexity.
Credits
I owe to Futurism and Cubism, and Bacon, of course. I have learnt ambiguity through Jan Dibbets, photographic play through Man Ray, and distortions by lessons of Diane Arbus and Thomas Ruff. The theatrical setting is inspired by the photographs of Andreas Gursky, Sandy Skoglund, Jeff Wall and Gregory Crewdson – whose influence is significant in the A perfect crime series. Philosophically, my mentors are Derrida, his deconstructivist theory and Deleuze. Franco Vaccari, is my intellectual father. The Helsinki School is my artistic referee.
.
.
.
.
.
.
.
source: eduardplanting

Silvio Zangarini was born in Turin in 1981. He is a traveler, photographer, philosopher, and lover of architecture, who has dedicated his life to research.

His view of reality guides him in his research and inspires to capture these images in pictures: a reality that does not have any preconceived order and therefore is open to interpretation. Zangarini’s pictures express his point of view about the world, which, through his photographs, becomes more relevant than the subject itself. These images transcend his personal order, giving sense to chaos.

For Zangarini, the primary subject of his pictures is everyday life, which at the beginning was a reality to discover and subsequently became a place where he discovered a deeper mystery that is always hidden behind what appears to be banal. By seeking a deeper mystery, one is led to ask questions about the meaning rather than be given answers. Art allows him to combine the appeal of the mystery to the will of action that has emerged from his philosophical contemplations; his life has evolved from asking how to asking why.

He integrates the technical knowledge’s of analogical photography he learned from his father to the new technologies provided in the new digital era. He graduated in 2012 with a thesis that highlights the elements of anti-humanism and structuralism in the art of Franco Vaccari – from both an artistic and a critical point of view. His works evoke astonishment, surprise, and mystery to those who observe the world.

His art has been displayed in several solo and collective exhibitions both in Italy (Venice Biennale, Turin), in Denmark and in The Netherlands. He collaborates with the Milan-based ‘Arte20 Group’ agency and the ‘Bottega Indaco’ group of artists in Turin. Currently, he lives and works between Turin (IT), Aarhus (DK), and Utrecht (NL).