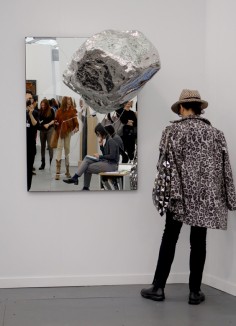 Zhan Wang (b. 1962 Beijing, China) is widely recognized as one of China’s leading contemporary artists today. Working in installation, photography and video, his sculpturally informed practice challenges ideas of landscape and environment, addressing the urban, rural, artificial and industrial. Zhan Wang’s art is a particular perspective fundamentally anchored in his relationship to his own cultural heritage.

Zhan Wang’s most celebrated work to date is his series of “artificial rocks” – stainless steel replicas of the much-revered “scholar’s rocks” traditionally found in Chinese gardens. The mirrored surfaces of these often monumental objects absorb the viewer and its surrounding environment, enticing them to become part of the work, an abstraction and distortion of reality, thus creating a visual interplay between positions of tradition and modernity. He further explores his fascination with material and reflection in a series of works titled “Urban Landscape” in which he recreates models of major cities, such as London, Beijing and Chicago – using kitchenware and cutlery. The process of miniaturizing an urban sprawl through the use of domestic and ordinary objects calls forth the basic necessities of life, despite the rapid modernization of contemporary society.

The strangely eroded rocks long revered by Chinese scholars were typically formed through geologic processes. Connoisseurs appreciated these natural sculptures for many of the same reasons they admired calligraphy: the sense of dynamic form, energy, and the interplay of positive and negative space. Artisans also produced facsimiles of naturally occurring rocks in various materials, including jade, glass, and ceramic. Zhan extends this tradition into the present day by recreating a scholar’s rock in an industrial medium. He began by molding sheets of stainless steel around the surface of a traditional Chinese scholar’s rock, then removed these sheets, welded them together, and burnished the surface until the seams disappeared. The resulting work challenges us to redefine the parameters of tradition and to ask how tradition sustains itself by evolving in the contemporary world.