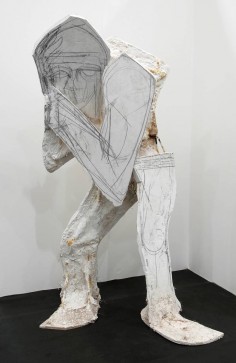 Houseago’s subjects lean to the figurative and mythological; bordering on abstraction, their rough hewn and incomplete forms both disclose their process of making and a sense of relational humility. Folded Man, a clunky semblance of a figure made from plaster-soaked jute wrapped over a skeletal support stands as an abject tribute to Boccioni; while Joanne, an emaciated rabbit, grimaces under floppy ears.

Constructed from plaster-coated iron with a delicate sketch of a figure on its side, the animal’s painfully flat body is exaggerated as both object and surface, an insubstantial vessel for spiritual manifestation. Similarly, Caryatide With Squatting Man plays upon the devices of representation to create diverse meaning: placed on a makeshift plinth to elevate its importance, Houseago’s elaborate column serves to support a hollow sheath of a figure posed in an act of desecration.

Throughout Houseago’s work lies an engagement with hierarchical considerations of visual form and their associated values. Challenging these preconceptions through making and content, Houseago creates his own alternative ‘histories’, reflective of a more intimate and empathetic narrative.