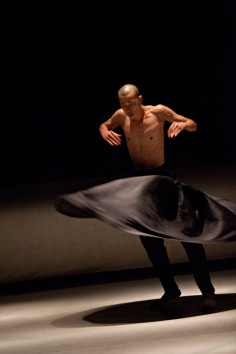 source:akramkhancompanynet
In July 1999 in the foyer of the Queen Elizabeth Hall in London, an animated and curiosity-filled conversation took place between the young gifted dancer/choreographer Akram Khan and an ambitious former dancer and just recently graduated arts manager Farooq Chaudhry. That conversation laid the foundation stone for a dynamic collaboration, culminating in the creation of Akram Khan Company one year later.

Inspired by Akram Khan’s early training in the Indian classical dance form Kathak, and the hybrid language that organically emerged when Akram’s kathak training encountered contemporary dance in his teens, a vision began to form, fuelled by a desire to learn and create through collaboration with the very best people across all the disciplines in the arts.

The rules were simple: take risks, think big and daring, explore the unfamiliar, avoid compromise and tell stories through dance that are compelling and relevant, with artistic integrity.
.
.
.
.
.
.
.
.
source:theguardiancom
In 2002, the premiere of Kaash felt like a watershed in Akram Khan’s career, the moment when this prodigiously talented dancer revealed himself as a choreographer of stamina and reach. It wasn’t simply that Kaash was his first full-length work, but that by collaborating with artists such as Nitin Sawhney and Anish Kapoor, Khan found a way of pushing dance into new realms of metaphor and metaphysics.

If Kaash was a revelation then, it hasn’t lost its impact now. On paper its ambitions sound diffuse, exploring ideas of the universe that are yoked together from theoretical physics and Hindu theology, yet on stage it conjures a vast and confidently imagined cosmos. Kapoor’s backdrop is dominated by a fathomless dark square – a geometrical black hole around which changing colours pulsate to the tumultuous drumming and chanting of Sawhney’s score. Khan’s choreography, meanwhile, is a dance of destruction and creation. His five dancers ride the music in stamping, spinning, flickering lines, a thudding ensemble from which individuals continually splinter off into variations of their own, as if Khan were suggesting the infinity of possibilities within a single phrase.

The core of Khan’s vocabulary is here – the whiplash speeds and silken arms, the percussive richness of bare feet against the floor, but some of the material has been reworked to reflect the stylistic diversity of its new cast. Kaash is not a perfect piece, its gear changes between exhilarating intensity and slow meditation can feel forced. But these choreographic changes pay dividends in the long solo sections where, extending the metaphor of creation, the dancers evolve from abstract particles to vividly specific individuals: Sadé Alleyne hugging the floor in a sequence of folding, twisting, creaturely moves; Sung Hoon Kim, tall, sinuous and floating like a bird in space.
.
.
.
.
.
.
.
.
source: theguardiancom
When Akram Khan was complimented by Mikhail Baryshnikov on the beauty of his dancing, it was one of the proudest but most ambivalent moments of his career. “Misha said he really admired the quality of my stillness,” Khan recalls. “And I was like, I’m so touched by this, but what about my turns?”

Any dancer might blanch at having their hard-won movement skills overlooked in favour of their ability to do essentially nothing. Yet when I think back over the three decades of Khan’s adult performing career, it’s those charged moments of stillness I remember with greatest awe. As a dancer he could rev his performance up to a vortex of whirling, stamping, strobing energy yet, in an instant, he could also switch himself down to a quietness so pure that the world seemed to be holding its breath.

There is no question that his command of dynamic extremes has made Khan one of the most physically thrilling dancers of his generation. Yet it’s those zen moments of hush that speak most deeply to the spirit of his performances, the ability Khan has to communicate, even to the most secular of audiences, that his dancing is a form of ritual, in touch with forces larger than itself.

Khan absorbed this sense of ritual from his training in kathak, the South Asian classical form that has fundamentally shaped him as a dancer. I remember him in his 2001 solo recital, Polaroid Feet, teasing out the rhythms of the tabla player with the percussive music of his own broad powerful feet, producing an orchestra of sounds that modulated from a thunderous rap, to a fluttering as delicate as a hummingbird. Like any kathak virtuoso, Khan seemed to posses two separate dancing brains: one that controlled the exacting logic of his footwork, one that allowed his upper body to float eloquently graceful and free. Despite his relatively solid build, Khan could move with a silken lightness, his arms weightless, his torso dipping and arching with the elasticity of a ballerina.

Khan has continued to be faithful to his kathak roots – he says that he still sees dance through a kathak eye. Yet as a kid he was inspired by Michael Jackson, as a young adult he trained in western contemporary dance, and in his 1999 film Loose in Flight we can see all the fearless exhilaration with which Khan pushed his body into new terrain. Elements of academic kathak are present in his dancing but they’re dismantled into a language of short, sharp, edgy urban gesture, and thrown drastically off balance by hurtling break dance moves, torpedo rolls and falls.

Over the years, collaborations with the ballerina Sylvia Guillem and the flamenco maverick Israel Galván have brought other elements into play, and as a mature dancer, Khan has become master of an astonishingly expressive range. In his autobiographical solo Desh (2011) he seemed to embody an entire picture book of imagery, dancing through the honking chaos of Bangladeshi street life, through awkward conversations with his father, and through the traditional tales that he tried to pass on to his own child. In Until the Lions (2016) his portrayal of king Bheeshma was like nothing he’d danced before, with all of his characteristic shape-shifting fluidity forced into the stiffened angry gait of a lonely embattled warrior. In Xenos, which receives its UK premiere at the end of May, Khan will perform a very different kind of soldier: a young Indian villager drafted into the first world war, his mind and body trying to make sense of its industrial scale of destruction.
.
.
.
.
.
.
.
source:totheaternl
Akram Khan is de grootste Britse choreograaf van zijn generatie. Zijn vernieuwende combinatie van westerse moderne dans en traditionele Indiase kathak heeft hem wereldberoemd gemaakt.