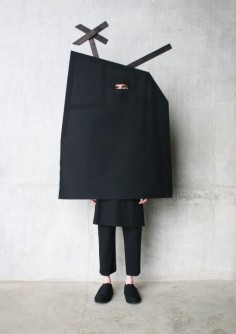 source:craiggreencom
London-born designer Craig Green established his namesake label in 2012 shortly after graduating the Fashion Masters course at Central Saint Martins. He has since carved out a unique position amongst the city’s most innovative talents and continues to earn both critical and commercial success globally.

Exploring concepts of uniform and utility, Green’s cult-like runway processions have become a highly anticipated fixture of the menswear calendar. Though known for their dramatic and deeply emotive qualities, his collections are firmly rooted in the steady development of simple, yet rigorously considered signature garments such as the Worker Jacket.

Green’s distinct offering of substance within spectacle has earned the label a loyal customer base within some of the world’s most prestigious boutiques and department stores. Stockists include Barneys, Bergdorf Goodman, Dover Street Market, Galeries Lafayette, Joyce, MatchesFashion, Mr Porter and Selfridges. Green’s work also resonates within wider creative spheres. His designs have been featured in a range of major exhibits including the Metropolitan Museum of Art’s ‘China: Through the Looking Glass’ in 2015, and 2018’s ‘HEAVENLY BODIES: Fashion and the Catholic imagination.’ The brand has also been commissioned to create costumes for Wayne McGregor’s ‘Obsidian Tear’ at the Royal Opera House in 2016 and Ridley Scott’s ‘Alien: Covenant’ in 2017.

Green’s accolades include Menswear Guest Designer at Pitti Uomo 94 in 2018, British Menswear Designer at the Fashion Awards 2016 & 2017, the BFC/GQ Designer Menswear Fund prize 2016 and Emerging Menswear Designer at the British Fashion Awards 2014.
.
.
.
.
.
.
.
source:businessoffashioncom
British designer Craig Green has won over legions of influential industry fans since Autumn/Winter 2013, when he first showed at London Collections: Men as part of Topman and Fashion East’s MAN initiative. Although Green’s designs are imbued with his fierce commitment to concept and challenging forms, the Londoner’s true genius lies his ability to parlay his cerebral inspirations into unique yet wearable clothing, often with utilitarian edge.

Green’s star has continued to ascend over the succeeding seasons, leading to significant, industry-wide renown. The designer held his first solo show in the Spring/Summer 2015 season at London Collections: Men, which Tim Blanks , the widely respected fashion critic and editor-at-large of The Business of Fashion, described as “a fashion moment,” in his review. Blanks told BoF, “Craig Green is fearless in his idealism. His clothes are grand gestures, but they’re poetic and romantic too. People sobbed at his spring show. Fashion craves that emotion.” It is not only the fashion press that has backed Green’s creativity. Influential retailers 10 Corso Como, IT and Comme des Garçons are all stockists. The latter granted Green its London store’s much-sought after window installation space.

Green’s designs have been featured in a range of exhibits including the Metropolitan Museum of Art’s “China: Through the Looking Glass” in 2015, and 2018’s ‘Heavenly Bodies: Fashion and the Catholic imagination.” Green’s accolades include British Menswear Designer at the Fashion Awards 2016 and 2017, the BFC/GQ Designer Menswear Fund prize 2016 and Emerging Menswear Designer at the British Fashion Awards 2014.
.
.
.
.
.
.
.
source:dazeddigitalcom
When Moncler released the image of Craig Green’s shiny black strappy puffer outfit last year from their first joint capsule collection, it didn’t exactly go down well on social media. “They had thousands and thousands of comments and they were all hate comments,” Craig Green reminisces. “And I was like, ‘Oh no, it’s over, I’m never going to do Moncler again.’”

Moncler clearly thought otherwise of Green’s sculptural down experiments, because fast-forward to this week, and his third collaboration with the outerwear giant, his first as part of the new Moncler Genius setup, has dropped to rave reviews. “I guess the engagement was big if not positive,” Green chuckles of last year’s hate on the ‘gram. “It’s quite fun to make people outraged sometimes.”

This time around, Green took things up a notch with his Genius capsule, which has all the marks of his poetically abstract own-label work, morphed into Moncler’s padded universe. The installation by set designers-slash-mad-scientists Isabel + Helen – which was erected at the beginning of Milan Fashion Week back in February – had pumping towers that would inflate and then drop to the floor. “Frédéric Sanchez who did the soundtrack used the sounds of the tower fans to almost make the room feel like it was vibrating. Just to make it even more scary.”

What was Moncler’s reaction to the installation and the collection itself?

Craig Green: They really let us go for (the installation) so that was nice. It’s fun to work with people like that. There are almost two collections: the more commercial collaboration of jackets, and then the showpieces, which were like the most extreme version of that idea. What’s nice about Moncler is that when we were putting the looks together for the presentation we were like, ‘shall we put a few commercial jackets in there?’ and Remo (Ruffini, chairman and chief executive officer for Moncler) was like, ‘don’t clutter the space, just have it as the purest version of the idea – people know they’re going to get a jacket.’ They’re very cool to work with, they’re not afraid to try, even if they’re not sure. They won’t just be like, no, that’s ridiculous. And they’re amazing at what they do. They have so much history and technology in down-filled jackets. They know everything. It’s a learning curve as well for me, a new way of working.

How did the relationship originally come about back when you did AW17?

Craig Green: When I initially got the email about doing the capsule format they had before Genius, I wasn’t sure what the relationship would be. I couldn’t work out how we’d relate to each other. So I met with them and the more I looked at it, the more I saw the similarities in the brands. I think they’re a brand that’s about protection and functionality at their core. The sports heritage, the functionality aspect of a lightweight down jacket, it keeps you very warm. Those are also ideas that I’ve always kind of explored within [my] collections, in a very different way. And I think they’re a brand that creates a uniform for their client. I’ve always loved those brands that own one garment. They’re the best brands. So the uniform idea and ideas of protection and functionality I thought maybe we could push in a weirder way that hasn’t been done before.

Craig Green: Oh, yeah, I saw that! That was quite funny. I thought it was hilarious. (It) is quite tampon-ish. I like that idea that two people can see something different in one image, depending on how their mind works. Something really dark or something ridiculous or really fun and innocent.

I did not immediately get tampon but I did get old school life vest.

Craig Green: Yeah, the garments were made from that idea. We were layering up different floatation devices and armbands onto the garment and kind of making it all as one. They were like human lifeboat things, people with tubes. The tubes came from inside of space suits, the oxygen tubes. But I thought it also looked kind of good that somebody else could blow you up if they blew on the tube. (laughs)

Craig Green: Yeah, that’s what everyone saw. A warrior thing. I thought maybe they looked a bit like cockroaches, Metamorphosis bugs or something. Like bugs or beetles when they’re pinned down on a board.

That’s really interesting in relation to your work because the cockroach is pretty much indestructible.

Craig Green: Yeah, the most protected! We need like a cockroach shell. That’s the next one.

Where do you think your fascination with protection comes from?

Craig Green: I’m not really a hundred percent sure why it always goes back to that. Everything always starts with that idea of uniform, protection and functionality. I always love garments that have a function or used to have a function. When it’s about uniform it’s always about the people that do the work, not about uniforms of stature. That romantic idea of uniforms and how things are becoming more and more mechanised. The need for skilled people is less and less so you don’t really see a group of mechanics in mechanic uniforms like how you used to. All of those things you’d use to protect you while you work almost don’t have a use anymore. Say like our quilted workwear jacket, our kind of classic piece, there are strings on there that kind of cinch into your waist or tighten certain things, but there are other ones that just look like they should do something but they don’t do anything at all. Like redundant technology or functionality. It’s kind of beautiful because it used to do something or it looks like you would pull it and the jacket would inflate and it doesn’t.

Craig Green: Yeah. People are slightly drawn to protective things even if they don’t live a life that needs those protective things. A little bit like people in the city buying a 4×4 and never going off road, or people wearing hiking boots but they’re just going to the pub or Sainsbury’s. People are drawn to that idea of being protected. But I guess that’s also the same as having a uniform. It kind of feels like you belong to something and that’s protective in that way, too. It’s that comfort of knowing that if something happens, you would feel (protected) which is kind of a weird human mental thing.

There’s also a sense of privacy the garments offer. How you can do them up around the face and then you’re in your own bubble.

Craig Green: Yeah, I love that idea of isolation tank as well. Or privacy. I guess privacy is like a new luxury, isn’t it? People always think it’s weird you don’t want other people to know what you’re doing [on social media]. I think it’s strange the other way! It’s nice to hide sometimes.

5 MONCLER CRAIG GREEN is available now in all Moncler boutiques, online, and from ssense.