When You Leave, Walk Out Backwards, So I’ll Think You’re Walking In 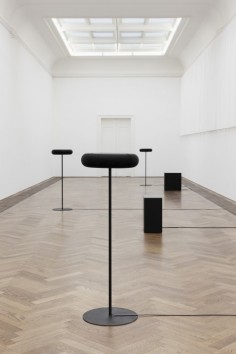 For her first solo exhibition at Kunsthalle Basel in Switzerland, the young artist Hannah Weinberger conceived a site-specific sound installation that fills the five ground floor galleries of the Kunsthalle. The work is titled When You Leave, Walk Out Backwards, So I’ll Think You’re Walking In and consists of eleven ambient sound loops that are played on the eleven channels that the artist has installed in the galleries.

The visual aspect of the piece is reduced to the loudspeakers, which are placed in the rooms and echo absorbing curtains that are installed alongside the walls. By walking through the different galleries of the Kunsthalle, the visitors to the exhibition are meant to compose their own soundtrack.

Hannah Weinberger was born in 1988 in Filderstadt, Germany. She lives and works in Basel and Zürich, Switzerland. Hannah Weinberger studied Media Arts at the Zürich University of the Arts. She is one of the founding members of the project space Elaine Mgk in the courtyard of Museum für Gegenwartskunst Basel (together with Tenzing Barshee, Nikola Dietrich, and Scott Cameraon Weaver).
.
.
.
.
.
.
.
.
source: swissinstitutenet

Le Moi Du Toi is the first exhibition of Hannah Weinberger (born 1988, lives in Basel) in the United States. The installation is a complex layering of sound, which will fill Swiss Institute.

For her exhibition, Weinberger has composed a series of electronic loops mixed in a constant cadence that recalls the rhythmic pulse of a beating heart (80-140 beats per minute). While minimal, the various tracks resound in a warm, constant and reassuring tempo that is soft, drawn out, and ambient. The loops are installed via a series of multi-directional speakers, each emitting sound. Long white curtains adorn the walls.

Le Moi Du Toi is a sensorium, one which viewers must negotiate and even complete as they ambulate through the galleries and travel between the many channels of sound. The self-directed installation elicits intuition, drawing visitors into the space and encouraging them to create their own soundtrack. There is no beginning or end to the permutations that the exhibition incites.

A large part of Weinberger’s praxis has been conceiving and conducting live performances. Incorporated into the context of group exhibitions, these works are collaborative, co-performed and co-produced with peers as ephemeral, one-time performances during which all those who have contributed to an exhibition participate. The resulting soundtracks are a tangible product of collective effort, celebrating and laying bare community involvement.

Le Moi Du Toi hinges upon a dialectic relationship, one highlighted by the very title of the exhibition. Weinberger’s offering is completed only with the visitor’s participation and even collaboration. In this manner, the individual authorship and experience becomes secondary to the experience of the whole.
.
.
.
.
.
.
.
source: biennaledelyon

b. 1988 in Filderstadt (Germany); lives and works in Basel and Zurich, Swiss/USA

Hannah Weinberger uses familiar sound loops in her deployment of works that are stories the spectator can test out according to his position in space and his personal inclinations. Using musical composition tools readily available online, she sets up sound flows that defy the standard notions of dissemination, listening and creativity.
.