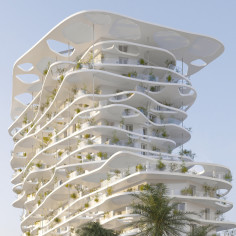 source:designboomcom
sou fujimoto, laisné roussel, and cino zucchi form part of a team led by lambert lénack architects, which has been selected to build a new neighborhood near the french city of nice. the competition-winning project, titled ‘joia méridia’, outlines plans for a mixed-use development organized around vibrant public spaces. in total, the masterplan includes 800 residential units, a range of retail outlets, offices, and a hotel.

the international and multidisciplinary team, which has been coordinated by lambert lénack architects, comprises work by sou fujimoto, cino zucchi, chartier dalix, laisné roussel, anouk matecki, roland carta, and landscape architect alain faragou. the brief called for a proposal that was inspired by the region’s vernacular architecture as well its mediterranean climate. the integration of vegetation was also an important factor, with a vegetable garden, an aromatic plant garden, and an experimental garden all included.

the development is structured around a network of three public spaces: the metropolitan square, surrounded by a succession of high-rise buildings, including sou fujimoto’s ‘méridia tower’; méridia plaza, a reinterpretation of nice’s traditional squares; and the patio, an intimate courtyard set within a wellness center designed by laisné roussel. it is hoped that the project, which represents an investment of €275 million, will be completed within six years, with the first buildings opening in 2021.
.
.
.
.
.
.
.
.
source:dezeencom
A tower with undulating, tree-covered canopies by Japanese architect Sou Fujimoto forms part of this competition-winning €275 million masterplan for a new neighbourhood in Nice, France.

Called Joia Meìridia, or Destination Méridia, the proposal details plans for a mixed-use development of 800 residential units, plus a hotel, shops and offices arranged around public spaces.

The brief called for designs that referenced the regional architecture of the French Riviera and that would be well suited to a Mediterranean climate.

Each architect worked on a different part of the masterplan. Sou Fujimoto’s contribution is Méridia Tower, a 54-metre-high white tower block.

The building will be wrapped in wavy contoured terraces supported by thin columns, which double as canopies for the balconies below. Cut-outs, some slatted and some left open, will allow a controlled mix of light and shade to reach the levels below, which all feature greenery in some form.

These details echo the projects that the Hokkaido-born architect – who ranked at number 32 on Dezeen Hot List 2017 – has built his reputation on. Examples include his “forest of light” for COS and his recent proposal for a plant-covered tower complex in Brussels.

Plants and trees feature heavily throughout the rest of Lambert Lénack’s 73,500 square-metre masterplan. It contains 2,000 square-metres of green space, including a vegetable garden, an aromatic plant garden and an “experimental” garden.

Lambert Lénack said its had conceived the project around the idea of “diaphanous minerality”, which it described as “a play of shadows and lights to enjoy the view and the sun, while guaranteeing islands of freshness”.

The masterplan organises the new buildings around three main squares. Sou Fujimoto’s tower will face Metropolitan Square, along with a series of high-rise buildings.

Meridia Plazza is designed to be a modern reinterpretation of the traditional squares of Nice.

The Patio will sit inside Cité du Bien-Être, a 5,000-square-metre sports and wellness centre designed by Laisné Roussel, creating a “micro-climate of shade and freshness”.

This Parisian architecture studio has form when it comes to diaphanous architecture – for the first architecture biennale in Lyon in 2017, it created a white metal tower and slide overflowing with flowers.
.
.
.
.
.
.
.
source:nice-addictcom
This new neighborhood will be including almost 51,000 m2 of housing (about 800 dwellings with a majority in accession, controlled price housing and social housing), 7,900 m2 of hotels, 2,850m2 of offices and services, 4685 m2 of shops and 1,220 m2 of private and public parking spaces. “We wanted this neighborhood to offer both a destination and a Lifestyle. With Joia Méridia, we are part of the city’s ambition to be an open metropolis on the world,” says Christian Terrassoux, president and director of General Pitch Promotion. Its mixed programming, focused on new uses, also takes current needs into account: a hotel, shared and dynamic workplaces, hybrid buildings and flexible housing.

Designed by an international team of renowned architects The project, reveals a great convergence between urban forms and open spaces. The frame of the neighborhood settles on a network of three places to which are attached three types of buildings: the Metropolitan Square, the Méridia Square and the Patio. The ground floor is designed as an active main floor while all public spaces are bordered by local businesses or active programs.