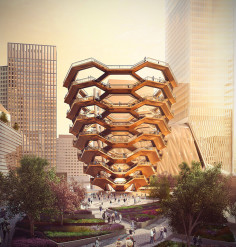 source:heatherwickcom
Heatherwick Studio is a team of 250 problem solvers dedicated to making the physical world around us better for everyone. Based out of our combined workshop and design studio in Central London, we create buildings, spaces, master-plans, objects and infrastructure. Focusing on large scale projects in cities all over the world, we prioritise those with the greatest positive social impact. Working as practical inventors with no signature style, our motivation is to design soulful and interesting places which embrace and celebrate the complexities of the real world. The approach driving everything is to lead from human experience rather than any fixed design dogma. The studio’s founder Thomas Heatherwick comes from a background immersed in materials and making. His curiosity and passion for problem-solving matured into the studio’s current design process where every architect, designer, landscape architect and maker is encouraged to challenge and contribute ideas. Positive and pragmatic, the studio’s team are collaborators whose role is to listen, question, then lead the conception and construction of special and unusual places. Ingenuity and inspiration are used to make projects that are affordable and buildable. And our client is vital, who comes on the journey and challenges our thinking; together we look for the opportunities that might traditionally be overlooked. Our best future projects are the ones that will teach us the most.
.
.
.
.
.
.
.
source:dezeencom
Visitors can now scale British designer Thomas Heatherwick’s giant honeycomb-like sculpture at New York’s Hudson Yards, which has opened along with the other public spaces at the vast West Side development.

Temporarily known as Vessel, the Heatherwick Studio-designed structure is welcoming the first visitors with timed free tickets to climb its 154 staircases from 12pm, 15 March 2019.

The huge artwork, which comprises a Escher-like lattice of the interconnected stair flights and 80 landings, officially opened with the rest of the plaza and gardens, and the retail and entertainment provision at Hudson Yards phase one.

“People often ask us, what is this for? Is it a viewing platform? Where are you looking to?” he told journalists ahead of a tour. “It’s not a building, it’s not a sculpture, it’s not an artwork, and yet it has scale and relevance to all of those typologies… In a way, we’re thinking of this as a piece of furniture. Its ongoing use will evolve, quite naturally.”

The studio chose to reference three-dimensional public spaces, like the Spanish Steps in Rome, when putting together ideas for the project. The resulting structure is narrow at its base, then expands to reach 150 feet high and 150 feet wide (46 metres) at the top.

“We didn’t want to build something that had a huge footprint, so very pragmatically, that is why it’s small at the bottom,” said Wood. “But as it grows vertically, you can see that it starts to increase in its geometry.”

First unveiled in September 2016, Vessel’s flights and landings create a mile of walkways that will no doubt become a popular selfie spot for tourists. A sloping elevator is also included to ferry visitors directly to the top level.

Wood said he believes that although vistas of the Hudson River and parts of the New York skyline are afforded from the structure, the best views are those looking inward.

Copper-coloured metal wraps the soffits, reflecting people standing or walking in the plaza below, while the materials inside such as concrete are much darker and in-keeping with the urban environment. “It feels like pieces of pavement lifted into the air,” said Wood.

Now the structure is open, a public competition will be held to determine its permanent name.

It sits at the heart of Hudson Yards, in the middle of a landscaped plaza by Nelson Byrd Woltz and surrounded by glass skyscrapers that are all either complete or nearly there. The most recent to open was Diller Scofidio + Renfro and Rockwell Group’s 15 Hudson Yards, which is attached to the expandable cultural venue known as The Shed – set to start its programming 5 April 2019.

Built over the top of a 28-acre (11.3-hectare) active rail yard, Hudson Yards is currently the largest private development in the US.

Phase one also encompasses two sister office towers and another corporate block by development masterplanner KPF, a residential skyscraper by SOM that will also accommodate the first Equinox Hotel, and a tall building by Foster + Partners.

The second phase will see the construction of eight more towers, along with a school and other neighbourhood amenities.

At the other end of the High Line, Heatherwick Studio has proposed a pair of condo towers with bulbous windows. Nearby, the British studio’s Pier 55 park is also underway, after a rocky and lengthy planning process.
.
.
.
.
.
.
.
source:shoppingdesigncomtw
討厭的人稱它「廢紙簍」，喜愛的人稱它為「紐約的艾菲爾鐵塔」，由英國鬼才設計師 Thomas Heatherwick 帶領的 Heatherwick Studio 所設計的垂直公共廣場「Vessel」昨日（3/15）正式對公眾開放。2,500 個階梯、80 個觀景台，8層樓高的「Vessel」挑戰了另類的公共空間型態，為參觀者提供足足一英里長的垂直攀爬體驗，可欣賞紐約 Hudson River 以及曼哈頓景觀。