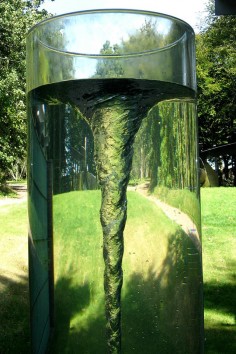 The natural world is a source of inspiration for many artists, and William Pye’s observations of natural forms, combined with his creative use of geometry, lie at the heart of his sculptures. Although brought up in London, Pye spent a lot of time at his family’s country home in Surrey, and was constantly fascinated by the water that abounded throughout the area. He captured on camera the local ponds and pools, reflections in still water and on its rippled surfaces, he dammed streams to make cascades and recorded the way water reacted to his intervention. On his travels he would photograph water: a particular gorge in Spain, a still, deep pool on a mountaintop in Mexico and water flowing down a mountain road in Wales are only three examples from his vast photographic library. Pye has used his reference material constantly: since his stainless steel sculptures, and from the 1980s when he introduced water as a major sculptural element in his work.

There are two reasons that make it important for William Pye to publish his own journals. One is that as an artist who works mostly to commission, his completed sculptures are usually site specific and by definition are permanent features for their locations. They are not therefore brought together in exhibitions. Pye’s solution for placing his work before a wider public lies in publications that show his sculptures through photography, drawing and texts. This is the second volume.
An artist seeing a flat representation of his three-dimensional sculpture, however beautiful the photograph, can never be certain that it communicates the essence of his work. Nothing can illustrate real scale, form, colour, material, movement, changing viewpoint, aspects, sight-lines and sheer presence other than the real thing. The photographs in this journal and in the former are very beautiful and are the best interpretations possible of a wide range of work. Many of the commissions shown here grew from people seeing and enjoying Pye’s sculptures illustrated in the last publication.
The interest shown in William Pye’s work over the last two years has given him the opportunity and confidence to develop his philosophy – a clear and confident position that lies, unusually, between the fields of art and design. This is a brave position to take, as to assume one stance usually prohibits the other. Pye positively enjoys working to commission, and takes pleasure in consultations with clients, in getting to understand the location for a new sculpture, and developing a sense of place and placement for his work. This can take days, months or years, depending on a multitude of factors ranging from alchemy to politics. His other great interest and joy is found in working with others – the architects, fabricators, foundries and stone masons, which, as Pye says, get fully involved. The technicians and advisers invariably retreat modestly after their part is completed. He has learnt a great deal from these collaborations, and his work has improved as a result of their contributions. In repaying their generosity of spirit, recording their involvement in his work becomes the second and no less important reason for these publications, as the facts may not be recorded publicly elsewhere.
Many of William Pye’s commissions have been made for Heritage sites. It is to his credit that he can be entirely sensitive to issues of history and conservation, and he invariably finds apposite solutions for them in his work. He is aware that to place a contemporary sculpture in the garden of a four-hundred-year-old house may require many attempts at finding a solution. He is an artist that cares to solve problems posed by others, with them, while also preserving his own artistic integrity. His responsibility to his clients and their sites is met openly, enthusiastically and above all, creatively. It is these creative working relationships at every level of a commission that has caused his work to be sought by corporate collectors, local authorities, governments, businesses and private individuals throughout Britain and abroad.
Often artists that work primarily to commission have a separate life in which they develop other, more personal work. This is not quite the case for Pye, whose studio resembles a laboratory rather than a sculptor’s workshop. The studio is where he develops ideas for new ways to shape water. These are then applied to commissions if appropriate. His studio practice is to build his sculptural vocabulary without necessarily producing a work of art as the direct result. The outcomes are a wide range of spouts and vessels, spectacularly orchestrated vortexes, streamlined lamina flows, textured waves or random splashes. It is in his laboratory that Pye also experiments with new materials, tests their compatibility with water and studies how water interacts with them. He is well known for his work in stainless steel and in bronze, but has recently introduced highly refined acrylic polymer that he has imported from the United States, which has no colour and has the apparent density of water.
This has allowed him to create sculptures that show a vortex with utter clarity and focus, as there is no distortion, parallax or colour change. Pye has also recently discovered a pale coloured bronze – Superston 70 – which is used for ships’ propellers and is very hard. When polished, water flows easily over its surface. He has used this form of bronze in a series of spout pieces and particularly likes the way in which it oxidises over a period of time, as the material develops a form of iridescence that is further enhanced by water.
But why focus on the year 2000 which is now consigned to recent history? It was a time of great activity in the arts, and many people felt that the year had to be especially celebrated and recorded. Commissions to artists abounded, and considerable numbers of works of art were completed, moved forward and conceived during the year. Pye received many commissions, and those shown here range from his massive water environment, Aquarena in Millennium Square, Bristol, to the modest but beautiful abstract Mother and Child at Prior’s Court School near Newbury. There are many works between those extremes illustrated in this journal, and all point to Pye’s considerable achievement within this particular twelve-month period.
.
.
.
.
.
.
.
source: tec-lifeblogspot

William Pye is known internationally today for his innovative sculpture with water; however, England & Co’s exhibition in February 2008 is focused on the early works of the 1960s and 1970s that first established his reputation as a significant British sculptor. For more than four decades he has worked on private and public commissions, both in Britain and abroad, and it is appropriate that his twin cones, the Slipstream and Jetstream water sculptures of the late 1980s, are seen by thousands of travellers at Gatwick Airport every day. Pye has works in public spaces and buildings, in parks and private gardens, yet his concentration on these mainly large-scale commissions has meant that he has had no consistent gallery presence since a major retrospective in 1978 at the Yorkshire Sculpture Park.
Pye was born in London in 1938 and, after National Service, attended Wimbledon School of Art from 1958 to 1961, and then spent three years in the Sculpture School at the Royal College of Art studying with Bernard Meadows. After leaving the RCA in 1965, he had an eight-year series of successful one-man exhibitions at the Redfern Gallery. Numerous commissions followed and he took the decision to concentrate on large-scale work that was not suitable for exhibiting in galleries, saying that ‘consequently I decided from then on to work independently’, mainly outside the gallery system. In the 1960s and 1970s he taught in London at the Central School of Art and at Goldsmiths’ College of Art; and also at Norwich School of Art, and in the USA as Visiting Professor at California State University. Since the late 1970s he has not done any regular teaching apart from the occasional lecture, and has concentrated on his public and private commissions.

William Packer has written perceptively about Pye’s work, describing how his ‘early student work was intensively concerned with archaic Greek sculpture, primitive votive and fertility symbols, and Mexican terracottas… he developed the visceral fertility imagery… and modelled organic forms were placed on or hung from structures based on Greek or Japanese temple architecture.’ Pye first visited Greece in 1960 and was moved by the ancient sites and sculptures. One of his two most significant works from this period, Deity Enshrined (1963), is included in this exhibition: the wooden shrine structure contains bronze sexual forms representing breast and phallus, that are suspended from chains, in works which have an affinity with some of the sexual imagery in the contemporaneous works of Louise Bourgeois.

Packer has described how soon after leaving the RCA, Pye ‘began to use reflective surfaces, and that references to Cycladic architecture characterised the contexts in which he now placed his images, chromium plated images which were now cooler, more impersonal and ambiguous… their ambiguity was increased when he began to use industrial steel tubes, rather than model and cast them. The specific physical reference was removed, and the organic nature of the imagery was implied solely by the intuitive convolutions of the tubing…’. A group of these early metal works form a major part of this exhibition, together with some screenprints from the period with reflective imagery that bridges painting and sculpture.