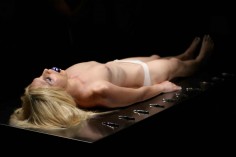 The Inability to Be Looked at and the Horror of Nothing to See is a live performance that takes form as a group meditation. Viewers are directed, by a disembodied voice, through a series of breathing exercises, new-age visions, and dark, dysphoric confessions, all the while being instructed to pluck out the hair from an androgynous, stripped body in the center of the gallery.

Zackary Drucker is an independent artist, cultural producer, and trans woman who breaks down the way we think about gender, sexuality, and seeing. She has performed and exhibited her work internationally in museums, galleries, and film festivals including the Whitney Biennial 2014, MoMA PS1, Hammer Museum, Art Gallery of Ontario, MCA San Diego, and SF MoMA, among others. Drucker is an Emmy-nominated Producer for the docu-series This Is Me, as well as a Producer on Golden Globe and Emmy-winning Transparent. She is a cast member on the E! docu-series I Am Cait.
.
.
.
.
.
.
.
source: autobody-movement
Zackary Drucker’s video is a documentation of a performance that explores masochistic identity construction, new-age tyranny, and collective experience. Viewers were directed through a series of breathing exercises, visions, and traumas, while participants pluck hair from the androgynous, stripped body of the artist.